The story of the African-American experience and Pullman -- as employees of the Company, residents of the town, and consumers of passenger car services-- is a complex and in many ways a painful subject. This site cannot begin to do the topic justice in a comprehensive manner; rather, it is intended as an overview, a glimpse into what life was like to a person of color in the early part of the 20th century. The results of deep prejudice, endemic racism, and the South's reaction to Reconstruction virtually ensured that such a glimpse is rarely a happy one. Pullman travel was intimately linked with civil rights affairs throughout the 20th century. The landmark Supreme Court case of Plessy v. Ferguson 163 U.S. 537 (1896) involved a man travelling on a Pullman car. The ruling upheld the constitutionality of racial segregation even in public accommodations (particularly railroad cars), under the doctrine of "separate but equal." (from Wikipedia)

The full story of the Pullman Porter is worthy of many exhibits. Suffice it to say that the Pullman porters had a hard, demanding, and frequently dangerous job dealing with a wide variety of problems. Porters were occasional targets of physical abuse, often suffered from verbal and mental abuse, and had to deal with "gun-toting lunatics", robbers, and accidents on top of the very difficult and never-ending tasks of their day-to-day responsibilities. In the early 20th century, Porters were dependent on tips for much of their income; that, in turn, made them dependent on the whims of white passengers. Porters spent roughly ten percent of their time in unpaid set-up and clean-up duties, had to pay for their food, lodging, and uniforms, and were charged whenever their passengers stole a towel or a water pitcher. Porters could ride at half fare on their days off - but not on Pullman coaches. They also could not be promoted to conductor, a job reserved for whites, even though they frequently performed many of the conductors' duties. There is not a part of the United States that during the height of rail travel was not ably served by the Pullman Porter. The Hammond circus train wreck occurred on June 22, 1918, and was one of the worst circus train wrecks in U.S. history. 86 persons died and another 127 were injured when a locomotive engineer fell asleep and ran his train into the rear of another near Hammond, Indiana.

The Chicago Defender, founded in 1905 by Robert S. Abbott, soon became the most influential news source for the African-American community. The Defender was a main voice in combating racial injustice. The paper's circulation was helped by Pullman porters and entertainers who distributed the newspaper south of the Mason-Dixon Line. Following years of boll weevil infestation, Jim Crow tenant farming, and economic collapse throughout the South, the Defender campaigned for blacks to migrate from the South to the North and was highly successful, tripling the black population in Chicago and other major cities in the North and Northwest in just 3 years. What became known as the "Great Migration" was a chance for better jobs and a better way of life for African-American families. Ironically, Southern leaders were at a loss to explain why African-American families would want to leave the oppressive and feudal conditions that existed at the time. The Defender also served as a way for Pullman Porters to keep abreast of each other, via John Winston's railroad-related social columns. The Chicago Defender, like most newspapers of the time, adopted the tactic of using sensationalist headlines and "yellow journalism" of the time to drive home its message. Mr. S. W. Green was in fact NOT lynched; rather, he was beaten, thrown in jail, and fined the then princely sum of $600.00 for court costs and damages.

"Grand Chancellor of Knights of Pythias" The Chicago Defender, May 31, 1913
It is measure of the mood of the times, in the era of public lynchings and Strange Fruit, that this was an entirely believable headline, and serves to underscore the tense atmosphere of violence that was a day-to-day reality for people of color.

White America viewed people of color as inferiors, open to ridicule and scorn. Otherwise good and decent people would think nothing of portraying black Americans as cartoon-like savages and were entertained by broad, offensive popular portrayals. An example of this can be seen in popular music of the time: Consider one such example of the casual racism portrayed in the staging of a company-wide fundraising minstrel show in 1919:

Casual racism easily spilled over into ugly and random violence and "Jim Crow" segregation laws designed to keep the races separated in Pullman car travel. The Chicago Defender is rife with stories of brutal and humiliating treatment south of the Mason/Dixon line, in Arkansas, and in Oklahoma.

Who Was Jim Crow

The term "Jim Crow" is used to describe the onerous segregation laws that arose after Reconstruction ended in 1877 and continued until the mid-1960s. The term "Jim Crow" actually began as a song, written by Thomas 'Daddy' Rice in 1828. Rice, a struggling New York actor, became rich and famous overnight by portraying the character Jim Crow, a highly stereotyped, cruelly exaggerated African-American character. Rice is credited with originating the practice of minstrel shows, appearing with a face blackened with cork on stages across America. By 1838, the term was being used as a racial epithet for African-Americans. Rice squandered his fortune and died in poverty in New York City in September, 1860.

Cover to early edition of Jump Jim Crow sheet music
Thomas D. Rice is pictured in his blackface role; he was performing
at the Bowery Theatre (also known as the "American Theatre") at the time.

At some point, at different times, people simply had had enough-- of violence, inferior service, and humiliation. African-American porters and passengers alike began to chip away at the Jim Crow regulations; however, it wasn't until World War II and really not until the Civil Rights Act of 1964 that the "separate but equal" laws, at least as they pertained to interstate travel on rail service and later buses, began to be repealed. The Brotherhood of Sleeping Car Porters was first organized in 1925. It was not until 12 years later that the BSCP won a collective bargaining agreement with the Pullman Company. The BSCP and its president, A. Philip Randolph, fought racial segregation throughout the United States and the South in particular up until the 1960s. 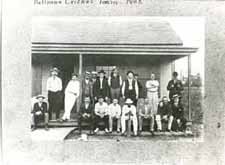