The water tower was located northeast of the Administration Building just outside the State Historic Site property. Its importance lies in the structural technology employed in its cage frame construction. It was 70' square at the base and 195' high, making it the tallest building west of New York surpassed only by Richard Morris Hunt's 260' high Tribune Building in NYC. Its load-bearing capacity was also much greater than virtually any other building in the country. The interior floors of the structure were supported by four massive phoenix columns resting on large, cone shaped concrete foundation piles. These columns were terminated at the eighth floor, where the two-story 500,000-gallon octagonal fire suppression water storage tank was located. The size of this tank and its height above the ground made for a water pressure of about 75 PSI. Potable water was purchased from Hyde Park Township (which included the Town of Pullman) and later the City of Chicago after Hyde Park was annexed into the city in 1893. Every house had iron sinks and faucets in the kitchen.

In 1982, Charles E. Gregersen, AIA, drew a detailed rendering of the Water Tower.
The 40' subbasement contained three water pumps, four sewage pumps, and a 300,000 gallon sewage reservoir. All of the town's sewage was collected in this cistern then pumped to a company owned farm south near 130th Street where it was used as fertilizer. The floors between the water tanks contained shops where female employees made details such as tassels for the Pullman Cars. After manufacturing operations ceased in the water tower, the space was used to store engineering and accounting records. 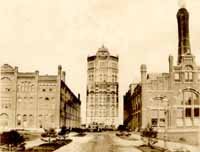 Left to right, The Allen Paper Wheelworks, The Water Tower,
and the Corliss Engine House.
A Dairy farm, located near the sewage area, consisted of 420 acres by 1890 and supported 80 to 100 cattle. Sewage slurry from the water tower cistern was pumped here and used to fertilize the farm. Icehouses were maintained by the company as a paying investment. The icehouse workers in the winter worked in the brickyards in the summer.

The water tower was unintentionally demolished in 1957 when the Pullman Company was preparing the original and now obsolete manufacturing properties for subdivision. An ill-fated attempt to raze a nearby smoke stack resulted in the smoke stack collapsing into the water tower. The water tower was considered damaged beyond repair and razed. The building rubble was used to fill in the sewage cistern.

The foundation of the water tower was excavated in 2000 during a capital project on the site that triggered archeology mandates of a National Register Site. During the excavation, Pullman State Historic Site rescued building remnants that had been buried in the cistern for nearly a half century. Some of the water tower artifacts have been incorporated into the landscape of a community park at 111th and Langley Streets while others are stored for future exhibition and interpretation. They are visible at the northeast corner of the state historic site near the former site of the Corliss steam engine.

From: Doty, Mrs. Duane. The Town of Pullman. T.F. Struhsacker, Pullman, IL: 1893. Reprinted by the Pullman Civic Organization in 1974. This massive structure, sixty-eight feet square at the base and resting upon a heavy cut-stone foundation, rises to a height of 195 feet to the base of the flag-staff; it is 210 feet to the top of the flag-staff. The dimension stones of the lowest courses in the foundation are nearly 40 feet below the surface of the ground, resting on a blue clay so hard that blasting was necessary in making a portion of the excavation for the building. This great depth was necessary in order to secure the large underground cistern, into which the sewage of the city flows. The city sewage mains enter this cistern sixteen feet below the surface of the ground, and it has a capacity of 300,000 gallons. The cistern is covered with a floor of solid masonry, resting on piers and brick arches, and upon this floor, ten feet below the surface, sewage and water pumps are placed.There are three Blake steam pumps, with [a] capacity for pumping 60,000 gallons per hour. These pumps are connected so as to pump either Lake Michigan or Lake Calumet water. Their ordinary work is to supply Calumet water for the elevators and for shop use. But when it becomes necessary to fill the tank on top of the structure, the connection with Lake Calumet is closed and Lake Michigan water alone is pumped into the tank. There are two Cope and Maxwell compound condensing pumps for sending sewage to the farm. They have a capacity of 5,000,000 gallons per day, though they only have a third of that work to do. 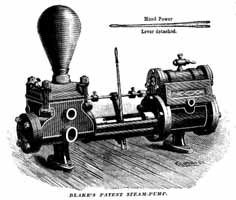 Blake's Simplex Steam Pump
The tower is square for about two thirds of its height and octagonal for the upper third. In the top of this tower a boiler-iron tank 55 feet and 10 inches across and 30 feet and 1 inch deep was built, in which a half million gallons are kept. The weight of this water is 2,297 tons. This is the largest tank in the world placed at so great an elevation. The object of this tank is to give pressure of from 70 to 75 pounds to the inch upon the mains. For fire purposes all that is necessary is to couple hose to the most convenient hydrant and the pressure easily carries water over any other building in the town. The tower pressure is only used in case of fire, the ordinary pressure from the Hyde Park pumps bring sufficient to keep a good supply of water in all houses. This reservoir us always nearly full and can be rapidly replenished if in use. It is supported by a network of iron trusses resting upon four long and heavy wrought iron columns which extend to the basement where they rest upon massive piers which start from the blue clay 30 feet below. The several floors between the ground and the bottom of the reservoir are now chiefly used for storage, and light manufacturing, elevators connecting the successive floors. The sewage of the town runs by gravity from houses to the cistern under the tower and is pumped away through a twenty-inch iron main to a sewage farm three miles distant and south of the town. It is pumped as fast as it is received, so that no fermentation can take place and no noxious odors rise from it. The cistern is ventilated by eight flues which run to the top of the tower and by a twenty-inch flue which connects the air over the sewage with the large chimney of the boiler house; this air is carried away with so much force as to create a strong downwind draught through the man-holes in the floor over the cistern. There is nothing offensive at this pumping station and there are no odors that can be detected beyond those of the oil used about the pumps and machinery. For the present the second floor of the tower is occupied by the electrical department of the car shops. Here are made electrical annunciators for cars, push buttons, batteries, and material for lighting trains. Here may be seen the Edison dynamo which lights the repair shops with 800 incandescent bulbs; there is also an Eickmeier dynamo used for charging batteries and lighting rooms in the tower. There are now twenty-six operatives employed in this electrical work. Here glass beveling, etching, crystallizing and embossing are all done and fifty operatives are engaged by a branch of the paint department. The remaining stories are used for storage. 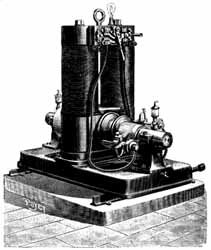 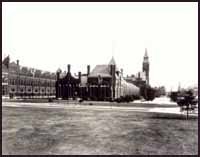 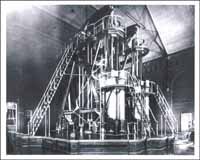 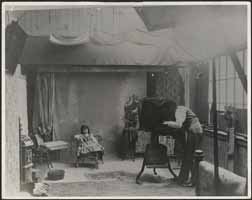