This apartment building was converted to a hospital by an addition at the rear of the building and served the Pullman workers for many years.

Postcard of the Hospital, ca. 1915.
It has been returned to its original use as a private dwelling and undergone substantial renovations.

Letterhead of the Pullman Hospital Association, 1915.
The elevator shaft was converted into new bathrooms on each floor, and the morgue is still in the basement.

Pullman's Athletic Island, the setting for regatas, races and other public athletic events. The brainchild of Nathan Barrett, the island was composed of fill from construction of the town and was an integral part of Pullman life until the death of George Pullman. When town maintenance decreased, the timbers rotted out soon after and the stands were demolished in 1898. It was replaced by a railroad roundhouse, Beman's last Pullman building. 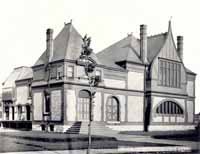 Entrepreneurial residents, according to the Daily News, March 14, 1884, formed a corporation called the Spanish-American Curled Hair Corporation. Its business was to import Spanish moss from Louisiana, clean it, process it, and sell it for mattress and furniture cushion padding. It was well capitalized, with initial assets of $100,000, including an investment of $10,000 from the Pullman Land Association (the holding company for the town of Pullman itself). The corporation actually built a factory in Pullman for $35,000. The company went out of business- and unfortunately lost all of its investors' money- because they could not compete against horsehair stuffing providers.