Almost a year after the opening of the Arcade, the Pullman Public Library was officially dedicated, on April 11, 1883. For the event, a special train ran from Chicago to Pullman, where the ceremonies were held in the theater. Although George Pullman was present, the dedicatory address was read by Professor David Swing, a liberal pastor of Central Church in Chicago and friend of George Pullman. He first read Pullman's document conveying the gift: I, George M. Pullman, of Chicago, Cook County, Ill., in consideration of the fact that the moral and intellectual growth of any community promotes and advances not only all of its material interests, but all the forms of human welfare, do hereby give, grant, transfer, and set over unto the Pullman Public Library, a corporation created and existing under and by virtue of the Laws of the State of Illinois, the following named books, publications, and periodicals...To have and to hold the same unto the said Pullman Public Library and its successors forever. In witness whereof I have hereunto set my hand and seal at Chicago this 10th day of April, A.D. 1883. -- George M. Pullman Swing concluded his remarks: The gentleman who gave these volumes, and who has been the soul of this new alliance between capital and labor, has among the many good works of his life done no one act more useful or attractive than this last act recorded in these many books. I thank him not only in the name of the grateful citizens of Pullman, but in the name of those good and kind beings in the outer circle who love to see the unfolding leaves and blossoms of a better civilization. This town boosterism was common among many in the middle and upper classes, who deplored the tenements, saloons and other vices, and the general nose-wrinkling muckiness of the 19th century urban experience. What Swing neglected to mention was that the "Pullman Public Library" was not a public library in the sense we know it today, but rather a subscription-based enterprise: adult users were required to pay $3.00 per year ($.25 per month) for the privilege of using it (the fee was $1.00 per year for children). Perhaps due to this cost, library membership never exceeded 200, although circulation continued to rise between 1883 and 1893. The library consisted of five rooms, with what must have been delightful 19th century decoration: The library proper is forty-two by sixty feet in dimensions, with three retiring-rooms for ladies and one for gentlemen. The architectural design is ancient Roman, and the woodwork is of unique pattern. The walls are beautifully frescoed in peacock colors and marine blue and gold, with a fancifully-designed frieze ornamentation. The floors are richly carpeted with costly Axminster velvet and plush. Along the sides of the main room are eleven double book-cases of tastefully-carved cherry, which contain 5,100 carefully-selected volumes. Ventilation and lighting have both been carefully looked after, a large skylight affording ample light. The "gentleman's" retiring room had a separate entrance and plain furnishings, to allow workers with "soiled hands and faces" library access without having to come in through the plush and carpeted main room. The first librarian was Mrs. Lucy D. Fake, followed in 1889 by Mrs. Charles B. Smith, then in 1897 by Miss Bertha Ludlam, a cousin of George Pullman. The collection was eclectic, but comprised of English-language books and journals. The "Tauchnitz Collection of British and American Authors" served as the basis for the 3,000 works of the original list and Doty's table of "Pullman Library Statistics for Three Years" give some indication of the breadth of the collection by 1892: art (400 volumes), biography (300), political economy (130), fiction (2,600), history (500), juvenile (750), literature (325), "mental philosophy" (55), poetry (300), religion (225), science (730), travel (300), reference (300), public documents (500), and bound magazines (335). [15] Given the extreme anti-unionism of George Pullman, there were probably no pro-labor, anarchist, union, or socialist publications, particularly if no foreign-language Chicago newspapers were included in the collection. The separate rooms were used for social and educational activities, such as the Womans' Union of Pullman, a charitable society...The Boys' Provident Club...The Pullman Whist Club; all kinds of University extension classes for the study of various languages, English literature and United States history; painting and china decoration classes; Girls' Reading Clubs; The Library Study Club, etc.

The Tauchnitz Collection of British and American Authors, which formed the basis of 3,000 volumes of the original Pullman Library book collection, was popular in Europe, especially for English-speaking tourists on the continent. As frequent European travelers, the Pullmans would have been familiar with this collection. If one examines with a magnifying glass the above photographs, one can see titles of some of the oversized books, including Art and Artist Illustrated, Historical Poems and Ballads, and Stories from the Old Testament for Children.

Bertha Ludlam's Account of the History of the Library 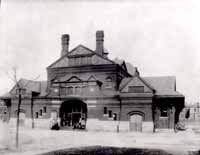 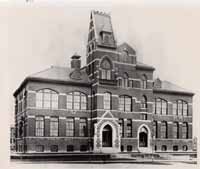 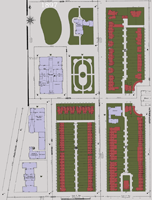